Goodbye Elf on the Shelf – Elf is headed to the North Pole. Eighteen creative a ways to say goodbye to your elf on their last night.

Goodbye Elf on the Shelf 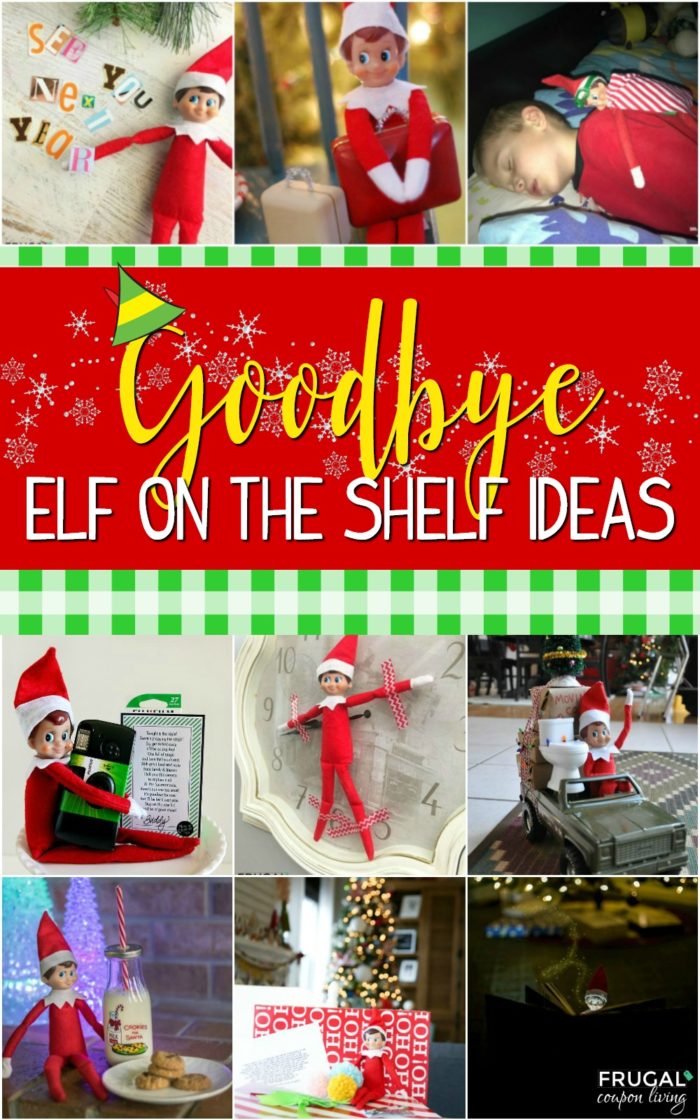 We know many of you are just beginning Elf on the Shelf. If you have been with us for a long time, you know we do Elf on the Shelf Ideas all November and December long. So for us, well we are in the middle of our Elf Season. While you are just welcoming Elf through the door, we know that it can get exhausting and daunting to come up with creative ideas for Elf. That is why we put together a full list of ideas for Elf on the Shelf to say good-bye (I mean, some of you might already be ready! Get I get an Amen?)

When Does Elf Leave?

Are you new to these North Pole visitors and wonder When Does Elf on the Shelf Leave? The Christmas tradition of when does Elf leave can vary per family. Some families like for Elf to be present on Christmas morning when everyone is opening gifts and then say by later that evening. For most families, however, Elf leaves Christmas Eve night when Santa drops off the Christmas gifts. It is then, that your red elves, hop in the big red sack and take a ride home with Santa back to the North Pole.

Tip: If you are forgetful to change your elf, don’t forget our Elf on the Shelf Tip – tried and true, never forget to move your elf again!

Elf on the Shelf Postcard

Just because it is time to say good-bye, doesn’t mean you have to loose touch! This year there are a few opportunities you can send a postcard from your Elf on the Shelf doll! 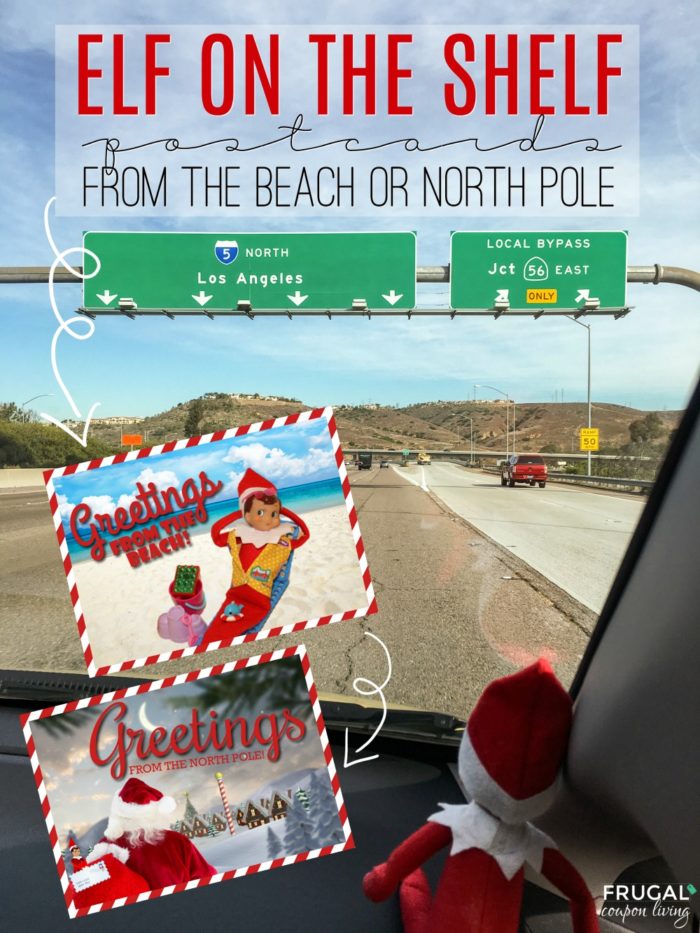 After you say good-bye, make sure to send a postcard from elf’s travel over the 10+ months he is not with you! This is great througout the year!

We have a postcard for you to send from Elf visiting the North Pole (perhaps right after his return back with Santa), Elf visiting the beach (now that he has time to relax) and even send an Elf Back to School note in August/September when the kids return to school!

We have an exclusive coupon code. Save 25% off your Elf postcard bundle with code POSTAL. Send your child a postcard a few times througout the year because saying good-bye is really hard!

Elf on the Shelf Last Night 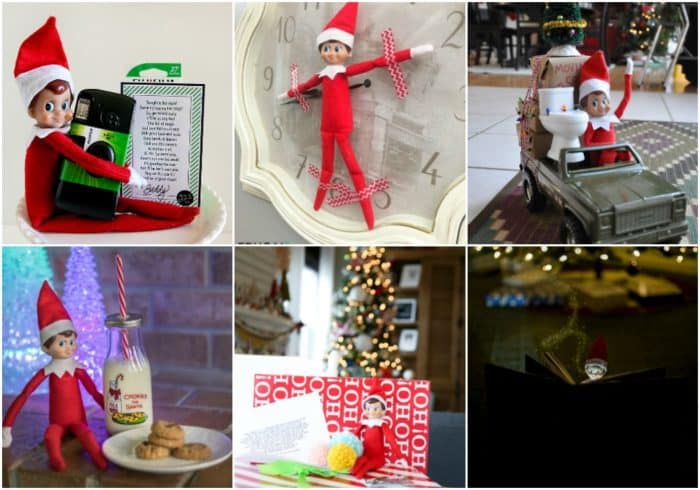 All packed up and heading back to the north pole! Elf backs up his stuff and waves good-bye. Wrap his accessories in jewelry boxes. | A Little Bit Funky

Before Elf goes, have Elf bring cookies for Santa. If your child cares to make them on his/her own, he can drop off cookie mix | Frugal Coupon Living

Another last night idea for Elf, a Goodbye letter with printable letter and hidden candy | Pocketful of Paint 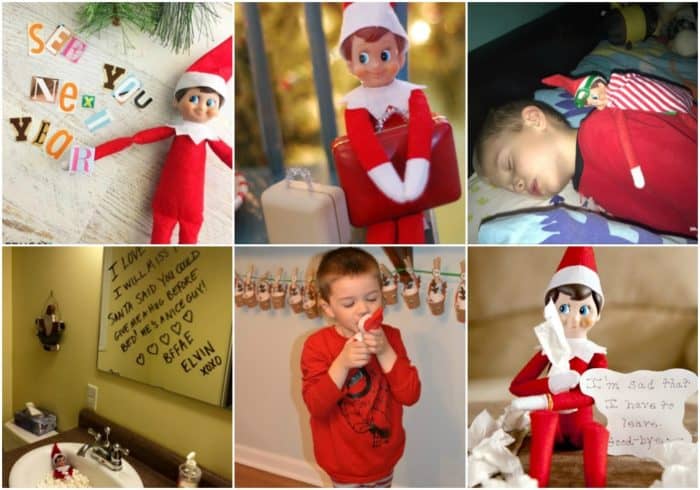 See You Next Year! Cut out letters form a magazine to spell a good-bye message from Elf. | Frugal Coupon Living

Elf packs his bags last night idea. These suitcases are made from jewelry boxes.  The handle is a pipe cleaner. | Sweet Cheeks Tasty Treats

See our full list of Elf Suitcase Ideas and an Elf on the Shelf Suitcase Printable.

Take a photo of Elf hugging your child goodbye while they sleep on Christmas Eve Night. | Amy on Pinterest

Leave a note on the mirror with a request of a hug before bed. | Stephanie on Pinterest

This is the last day is a time to kiss our elf goodbye… He doesn’t need the magic to return back to our house. | Balancing Home

Sniff sniff, I’m sad I have to leave. Surround your Elf on the Shelf doll with tissues and a sweet note. | Trina on Pinterest

Goodbye Elf on the Shelf - Elf is headed to the North Pole. Eighteen creative a ways to say goodbye to your elf on their last night. #FrugalCouponLiving #ElfontheShelfClick to Tweet

Good-Bye Elf on the Shelf 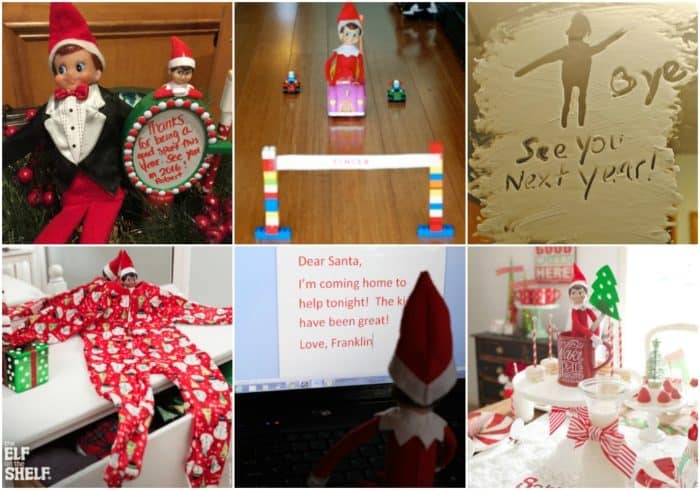 Did you have a silly Elf? Have him thank your little guy/gal for being in good spirits this year and tell them you will see them next year. | Leslie on Pinterest

It’s the end of Elf’s ride… Elf is approaching the finish line! | A Small Snippet

Elf vanishes through a mirror or a glass door leaving a note behind. | Frugal Coupon Living

Have Elf deliver Christmas Eve pajamas that you child can wear that evening and Christmas morning! | Elf on the Shelf

“Dear Santa, I’m Coming Home Tonight!” elf types on the computer… Maybe he can mention that your child is on the nice list.| Busy Kids Happy Mom 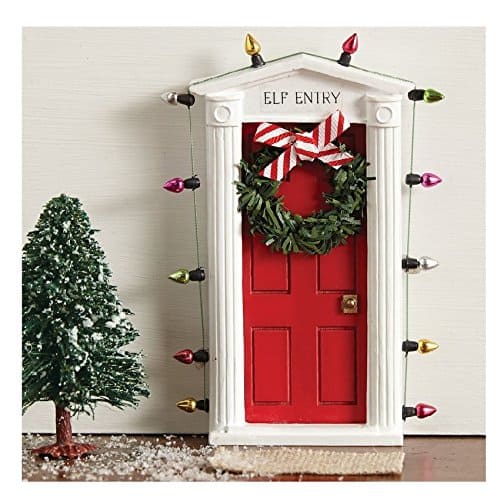 Don’t forget we have many Elf on the Shelf Door Ideas. Elf can both arrive in a door and exit in a door. Some cute ideas come with Christmas lights, white picket fences and evergreen wreaths. Very festive and homey for your Elf’s journey back home. Of course, this magic door can be how Elf returns to the North Pole to visit Santa Claus every night!

… and this idea made it too late to our round-up. The End is Near! Pin to Pinterest. 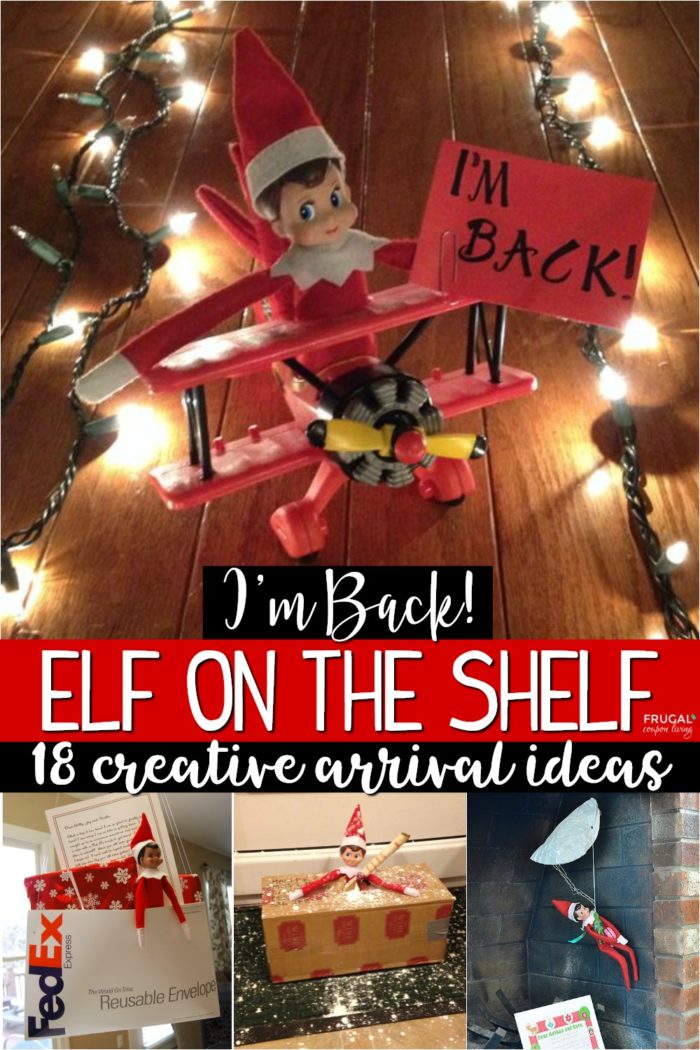 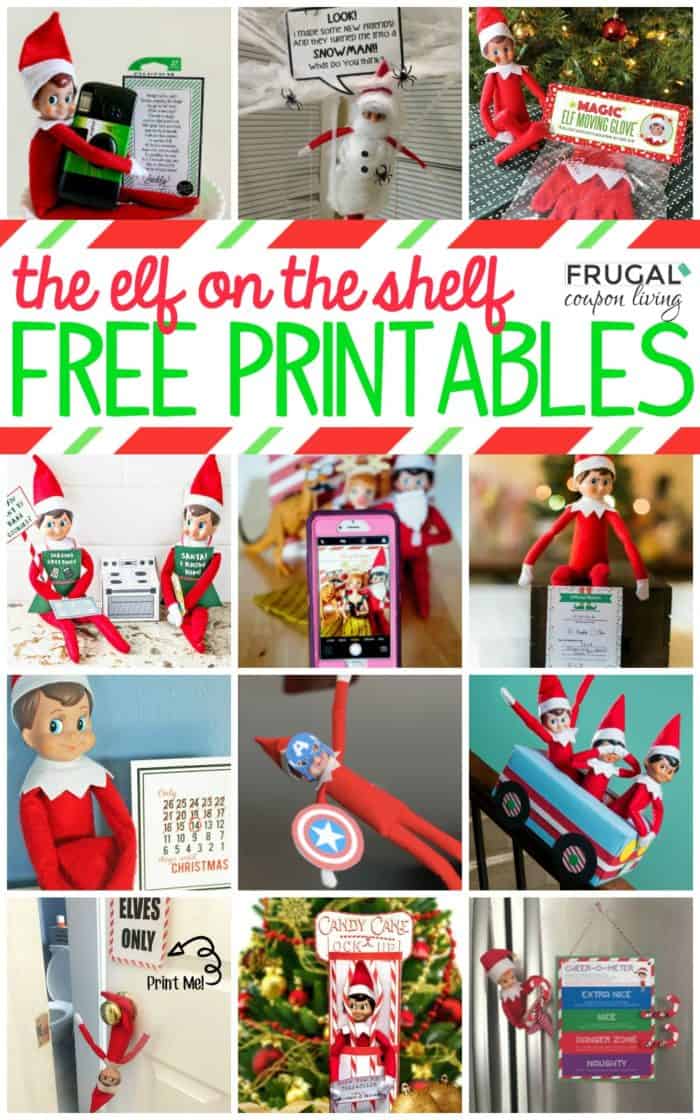 Also stay with us all season long as we share our daily Elf on the Shelf Ideas! Hundreds of ideas for every night of the week! Pin to Pinterest on your Elf on the Shelf and Christmas boards. 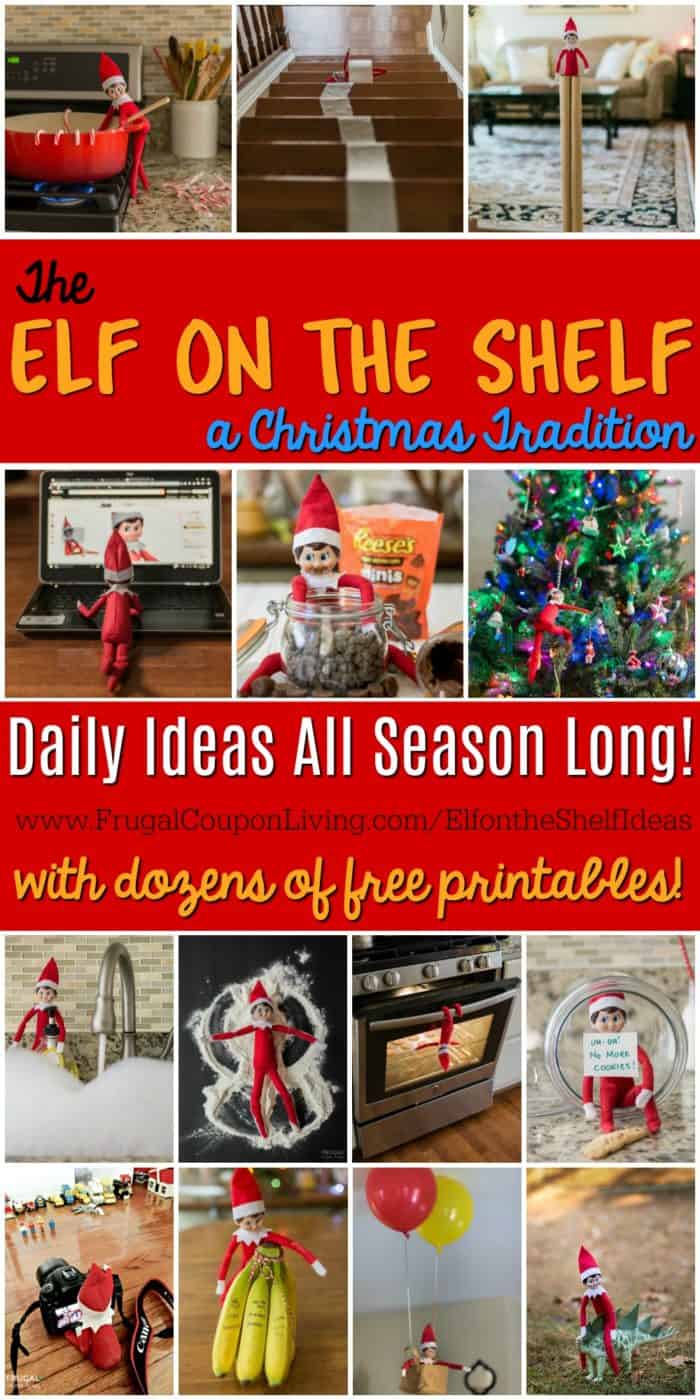 WHAT’S TRENDING? How to Trap Elf on the Shelf in a Balloon or the TV. Your kids will love this!

Also access our Free Elf on the Shelf Printables! We are here to help you with your North Pole friend! Make sure to visit our Elf Store to cover you on printables for the entire season!